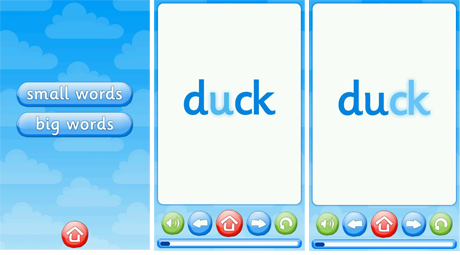 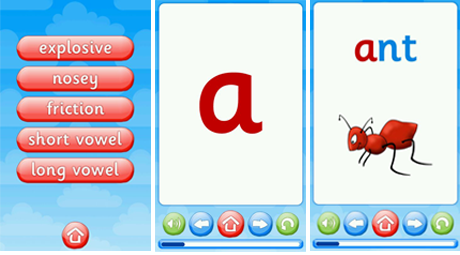 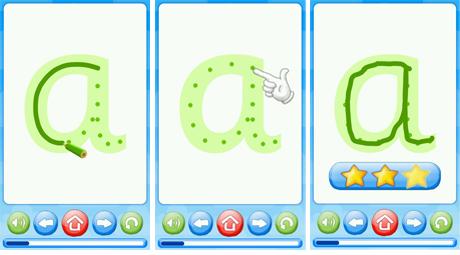 Read Write Phonics teaches the 44 phonic sounds of the English language, how to blend the phonic sounds together to form words, and how to write the letters of the alphabet by tracing dotted letter forms.

Features:
Learn by doing: tap and swipe through the App listening to the correct sounds and blending the sounds into words.
Fun encouragement and reward stars are given in the Write section.
Clear and simple flash cards system with simple intuitive navigation.
Clear Sassoon font developed especially for children’s first books and traditional learning aids.
Clean design, there are no distracting images or sounds in the Write or Phonic sections.
Focus on learning the sounds and learning how to form letters, without distraction.
The example word cards in the Read section each use one simple bright word image.

Navigation:
Move through the App using the arrow keys, the speaker button replays sounds and the redo button restarts animation. The home key takes you up a menu level.

The Three Sections:
The Read section contains a flash card for each of the 44 sounds, showing the letter or letter combinations which represent them. Once the sound has played wait for the letter/s to animate into an example word, tapping the speaker button plays the sound or word again.

The Write section shows an example of how letters are written, then allows the child to try tracing the dotted letter, with a prompt where to begin and a prompt if they forget to dot the i or cross the ts! Then wait for your mark, 0 to 3 stars! The App marks the child's effort based on the smoothness of their line and the distance from the ideal line. Encouragement is always given even if no stars are achieved.

The Phonics section includes small, two and three letter words and big, four letter and above example words. Tapping the speaker button plays the full word, tapping each letter or letter combination pays the phonic sound. Swiping or stroking through the word plays the sounds in order blending or synthesising the word.

(Note; the ck sound has been included three times with cards, c, ck, and k all making the same phonic sound. qu and x also included for completeness but are actually consonant blends (k + w) and (k + s). The letters and letter combinations chosen for read write phonics are the most common ones and the ones taught first for example “ee” in “bee” instead of “y” in “many”)